‘Burnt to ash’: Bus catches fire in Bulgaria, killing 45 people onboard, including children
Updated: November 23, 2021 by admin
Disclosure: We are a professional blogging site that receives compensation from the companies whose products we review. We test each product thoroughly and give high marks to only the very best. We are independently owned and the opinions expressed here are our own. 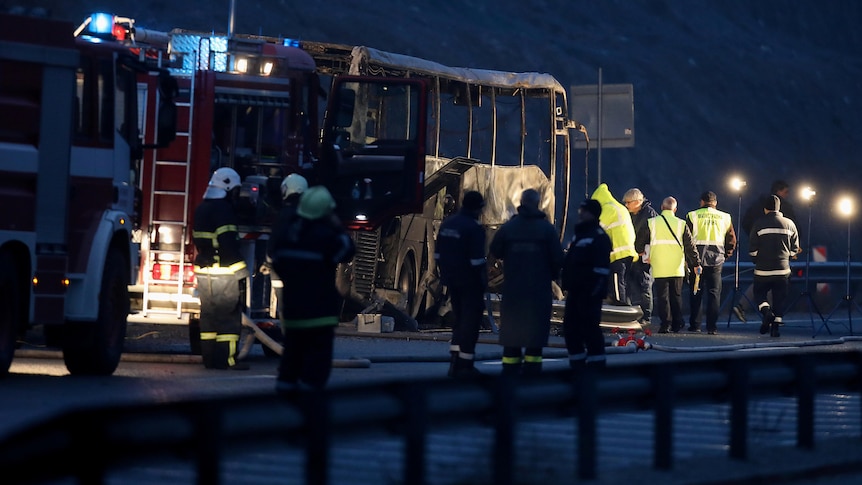 At least 45 people, including 12 children, have died after a bus carrying mostly North Macedonian tourists crashed in flames on a highway in western Bulgaria hours before daybreak.

Seven people who leapt from the burning bus were rushed to hospital in Sofia and were in stable conditions, hospital staff said.

Interior Minister Boyko Rashkov said bodies were “clustered inside and are burnt to ash”.

“The picture is terrifying, terrifying. I have never seen anything like that before,” he told reporters at the site.

The cause of the accident was unclear, but the bus appeared to have hit a highway barrier either before or after it caught fire, Bulgarian officials said.

Television footage showed the bus charred and gutted by fire in the middle of the highway, which was wet from rain.

“I take this opportunity to send my condolences to the relatives of the victims,” Mr Yanev said.

“Let’s hope we learn lessons from this tragic incident and we can prevent such incidents in the future.”

Authorities say the accident happened on Struma highway, about 45 kilometres west of Sofia around 2am.

The coach party was returning to Skopje from a weekend holiday to Istanbul, a trip of about 800 km.

North Macedonian Prime Minister Zoran Zaev said he had spoken to one of the survivors who told him the passengers were sleeping when they were woken by the sound of an explosion.

“I am terrified. This is such a huge tragedy,” he told private television channel BTV.

“Human mistake by the driver or a technical malfunction are the two initial versions for the accident,” he said.

Bulgarian news agency Novinite said representatives from North Macedonia’s embassy visited a hospital where some of the victims were taken.

In 2019, Bulgaria, a European Union nation of 7 million, had the second-highest road fatality rate in the 27-nation bloc, with 89 people killed per million population, according to European Commission data.