The Boys Season 3 Trailer: Jensen Ackles’ Soldier Boy Explained
Updated: May 17, 2022 by admin
Disclosure: We are a professional blogging site that receives compensation from the companies whose products we review. We test each product thoroughly and give high marks to only the very best. We are independently owned and the opinions expressed here are our own.

Warning: This article contains spoilers for Seasons 1 and 2 of The Boys.

Amazon’s The Boys Season 3 is set to introduce us to Soldier Boy, played by series newcomer Jensen Ackles (Supernatural), while also, it seems, diving deeper into the origins of Vought International. And now we know what Ackles will look like in his superhero suit and we have trailers for the new season.

Watch the latest trailer below, or check out our The Boys Season 3 trailer breakdown.

Through its first two seasons, The Boys has already deviated from the comics in a number of ways, so it’s likely there will be some more surprises in Season 3 and beyond. The third season’s first episode is titled “Payback,” according to a tweet from showrunner Eric Kripke, which could apply to almost any of the characters after the events of Season 2’s finale… but probably is also a reference to the World War II-era superhero group that started it all, and which Soldier Boy belonged to.

So, who are Soldier Boy and Payback, and how are they a skewed version of the Avengers? Read on, or watch the video for the full story!

The original Soldier Boy led a superhero group called The Avenging Squad, a precursor to what would eventually become Payback. He and his Compound V-doped supersoldiers fought the Germans in World War II. Unfortunately, Soldier Boy unknowingly led them back to a US Army camp which caused not only a massacre of the Nazi soldiers, but also his fellow Avenging Squad team members in addition to many American soldiers. Soldier Boy, wounded from this attack, was ultimately killed by George Mallory (in the show, Mallory was gender-swapped into the character Grace Mallory, the former Deputy Director of the CIA and the founder of The Boys).

The more recent iteration of Soldier Boy was much weaker and more timid than his WWII counterpart. His superhuman strength, speed, and shield-wielding are clearly a parody of Captain America, but he lacks the heroic nature and leadership of Cap, instead being the target of frequent bullying from his Payback team members.

Soldier Boy’s only desire is to eventually make it into The Seven one day, and his naiveté leads him to be taken advantage of by many of the modern superheroes. He is even tricked into having sex with Homelander in exchange for a spot in The Seven, something which never comes to be. 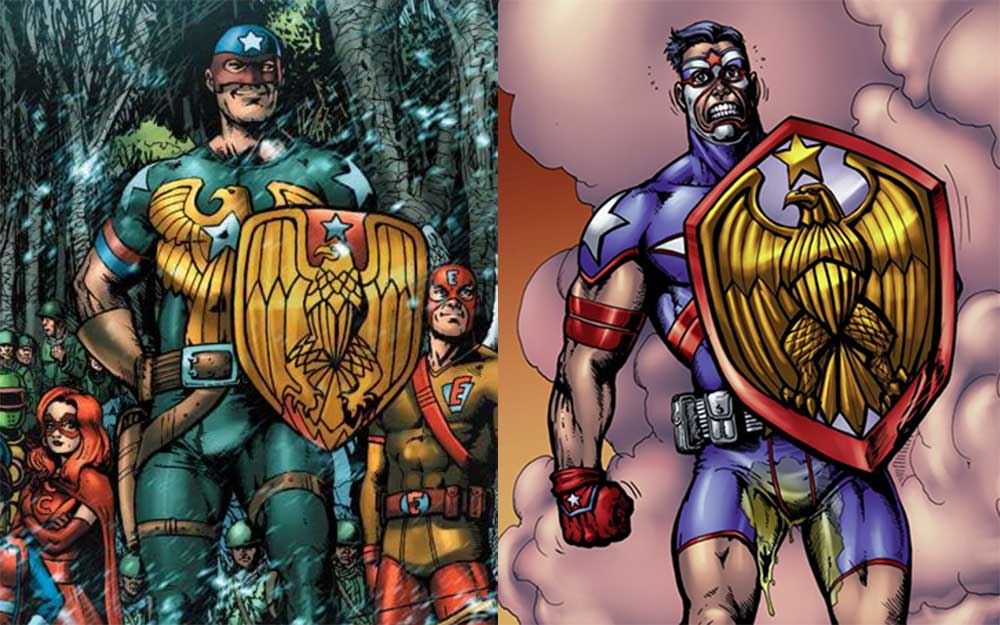 The WWII-era and modern incarnations of Soldier Boy.

Vought never disclosed the death of the original Soldier Boy, instead leading the general public to believe that the modern iteration was the same hero from WWII that never aged, in part due to being exposed to Compound V.

We know that Soldier Boy will be portrayed by Supernatural star Jensen Ackles, teaming up with The Boys showrunner (and Supernatural vet) Eric Kripke once again. According to Amazon, “Ackles will portray Soldier Boy – the original Superhero. After Soldier Boy fought in World War II, he became the first super celebrity, and a mainstay of American culture for decades.”

Soldier Boy has been hinted at throughout Seasons 1 and 2 of The Boys, most notably with a statue outside Vought International that depicts the supersoldier directing his forces and armed with a gun instead of his signature shield. Stan Edgar (played by Giancarlo Esposito) briefly mentioned Soldier Boy’s existence during WWII when Frederick Vought was dosing soldiers with Compound V. There’s also a poster of Soldier Boy on the wall in the bedroom of the crazed superfan that opens the seventh episode of Season 2.

Through the history of the supes, we can tell a little bit about the history of America and how we ended up in the current fraught position that we’re in. Soldier Boy gives us an opportunity to do that.

“Through the history of the supes, we can tell a little bit about the history of America and how we ended up in the current fraught position that we’re in. Soldier Boy gives us an opportunity to do that,” said Kripke.

Not much is known about just how Soldier Boy will factor into the overall story of Season 3; but the casting of Ackles leads us to believe he may be depicting the original version of Soldier Boy rather than the weaker character who inherited the mantle, which doesn’t exactly seem like the actor’s type.

“Soldier Boy is the original bad ass,” said costume designer Laura Jean Shannon. “Our goal was to highlight a bygone era of overt masculinity and grit. With that pedigree we dove headfirst into baking in an all-American quality grounded in a military soldier’s practicality with a heavy dose of old school cowboy swagger. We knew that the actor had to have Steve McQueen looks and chops with a John Wayne attitude, luckily Jensen Ackles embodies all of that.”

Tek Knight is the only superhero in Payback not imbued with superpowers. Instead, he is a wealthy playboy possessing a sophisticated suit of armor that he uses to fight. Clearly drawing inspiration from Iron Man, Tek Knight also takes some cues from Batman as he operates out of a cave and had a sidekick at one point (and a butler).

In the comics, Tek Knight had a brain tumor that caused him to become a sex addict, having sex with anyone and anything that he could. The Boys comics had a notorious miniseries titled “Herogasm” which is everything you might expect. In a Reddit AMA thread, Kripke already hinted that “Herogasm” may show up in Season 3 in some form or another.

Although Tek Knight hasn’t made an appearance in the TV series, he has been mentioned briefly. In Season 1, Butcher finds out he saved an elderly woman, while Season 2 hints at his having a showdown with Shockwave on the cover of a newspaper.

Eagle the Archer is the team’s resident Hawkeye, equipped with a bow and arrow and pinpoint accuracy. He’s actually the first Payback member to make an appearance in Season 2, saving The Deep from his downward spiral and recruiting him into the Church of the Collective.

After refusing to cut his mother out of his life, he is excommunicated from the church, with its members told not to associate with him in any capacity. Now that Eagle the Archer has been cut loose, maybe it’s time to team up with the remaining members of Payback to seek… er… payback? 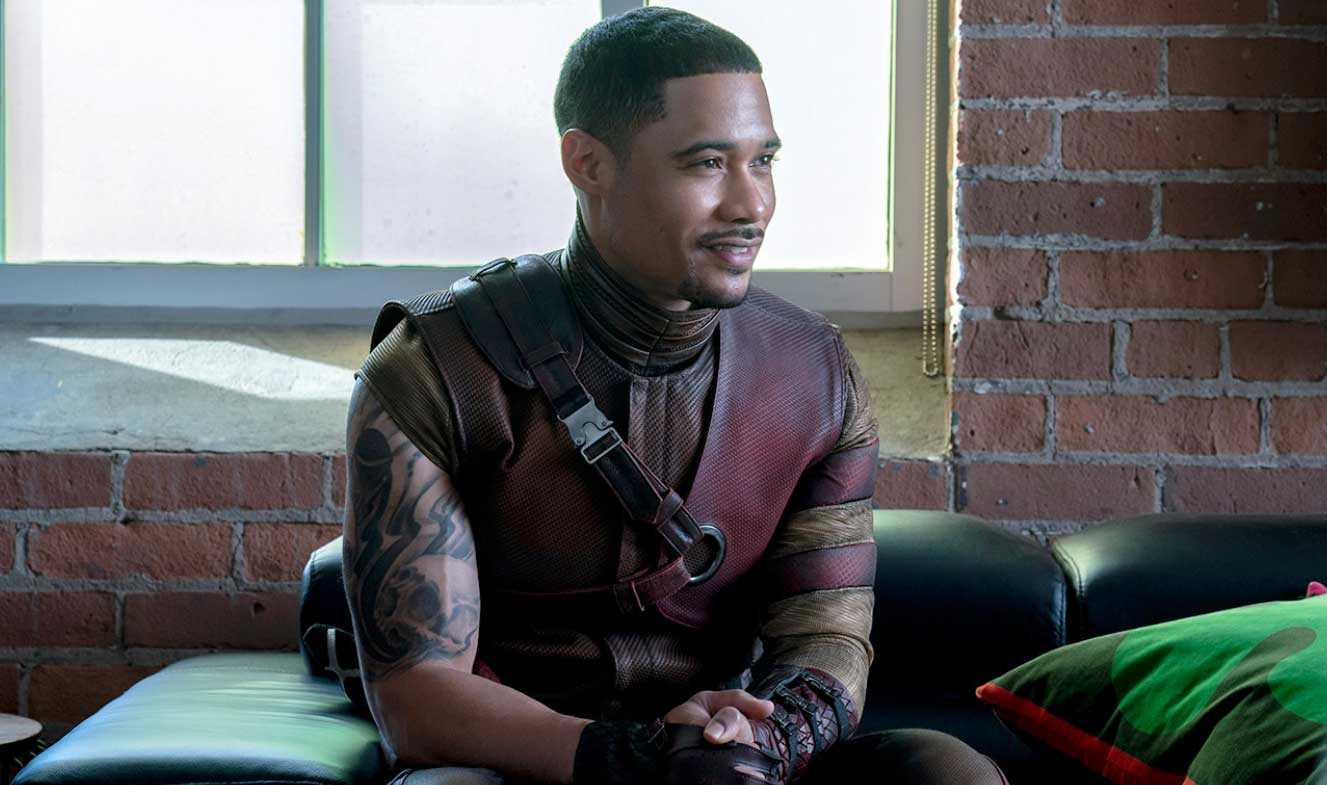 Eagle the Archer in The Boys Season 2.

Mind-Droid is actually not a robot, but a human in a robotic suit. He possesses telepathic abilities allowing him to read the minds of others. He also has a jetpack giving him the ability to fly. No mention has been made of Mind-Droid in the TV series yet.

Swatto takes his cue from Ant-Man, given that he can manipulate his size and fly around. He doesn’t talk, instead communicating in a series of buzzing noises that only Mind-Droid can understand. He is also unmentioned in the TV series so far.

How Will They Fit into Season 3?

The Boys Season 3 will see the titular group officially sanctioned by the CIA while they continue to fight against the machinations of Vought.

With The Seven falling apart at the seams, and Homelander on a mission for revenge, it will be interesting to see how Kripke integrates Soldier Boy and Payback into the story. Will it include a series of flashbacks to give some context to how Vought came to be?

The biggest question is how many of Payback’s original members are still alive. Given that there’s a statue memorializing Soldier Boy outside Vought International, it’s possible that he is no longer living (at least in his supe iteration). Could Ackles be given the mantle as a new-and-improved version of Soldier Boy, maybe one that is brought in to keep Homelander in check?

Stormfront was critically wounded at the end of Season 2, but her status in Season 3 is unknown. And Eagle the Archer was alive and well last we heard. Since the comics depict Payback attempting to take down The Boys, it’s possible we’ll see this story arc play out in some fashion. This could give The Boys a bit of a distraction while the fractured Seven reassemble into a full team once more. (Or who knows, maybe Soldier Boy will be joining The Seven, replacing Stormfront!)

For more on The Boys, check out how Victoria Neuman’s mindblowing reveal could shake things up in Season 3 and why The Boys’ showrunner thinks the MCU is “dangerous” in the way it portrays superheroes.

Matthew Adler is a Features, News, Previews, and Reviews writer for IGN. You can follow him on Twitter @MatthewAdler and watch him stream on Twitch.